Godwin Emefiele, the Governor of the Central Bank of Nigeria (CBN) says there is no cause for alarm in the imaginary drop in Foreign Reserves in Nigeria.

Emefiele said this on Tuesday while answering series of questions from reporters after the Monetary Policy Committee (MPC) meeting in Abuja.

“During the period when we had economic crisis in 2015, 2016 and early 2017 where reserves reduced to 23billiopn dollars, the country managed and survived it.

“We do know that there is focus on the fact that crude oil price is not as resilient as it was in 2018.

“We believe that crude oil price today at 63 dollars per barrel, notwithstanding the drop in reserves below 40 dollars should not cause any panic,” Emefiele said.

On CBN’s intervention in the foreign exchange market, Emefiele however, said that the apex bank’s policy of sustaining exchange regime would continue.

“There is no where you are going to find the hand of CBN intervening in the determination of the exchange rate.

“It is not the right statement for anyone to say that there is peg on the naira.

“Investors and exporters windows trade at market, as you know that the price at that market is not fixed, the price varies from N359 sometimes trade upward as high as N364″, the CBN Gov. said. 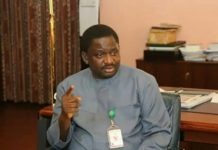