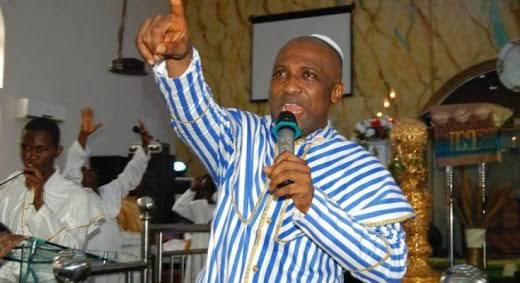 He also made it known that the battle between the embattled governor and his predecessor, Adams Oshiomhole is not yet over.

He said this ahead of the PDP primary election that is scheduled to hold tomorrow, Thursday.

He had earlier predicted the battle faced by the Edo state governor as far back as 2016 and the trouble that is currently facing Adams Oshiomhole, who was asked to step down as the chairman of the APC through court judgment.

He briefly said in a set of prophecy that he sees Obaseki being eased out of the APC primaries because Adams Oshiomhole is hell bent on making him lose out. He also said that fighting the governor is unnecessary and that if care isn’t taken, Adams Oshiomhole won’t see 2023 as APC Chairman.

However, after his prophecies have happened, he has brought up fresh ones that will serve as direction for Godwin Obaseki.

He said that he sees him becoming a winner in the PDP Primaries but he still needs to put his house in order and that if he wants to come out in flying colours in the general election, he needs to accommodate all PDP Members in the state.

Primate Ayodele also advised the governor to be prayerful and strategic in PDP because he needs everybody in his camp at this period and failure to do so, he will be defeated at the general election.

He noted that war between Obaseki and Oshiomole is not yet over until the general election, he said the former APC national Chairman will follow him bumber to bumber to PDP and plot his people for his downfall, “so their fight is not over,” Ayodele added.

Similarly, The most accurate prophet has warned Ondo State Governor Arakunrin Akeredolu to be vigilant and be prayerful because there is heavy indication to frustrate him out of the way and that if Akeredolu wants to win the primary election he need to restrategize and involve God because all his efforts will be frustrated, he said there will be a lot of kangaroo manipulation1 of election result.

‘’Akeredolu should sue for peace if he want to contest under the platform of All Progressive Congress (APC) because they want to destabilize him. He should do everything within his power otherwise they will manipulate and give it to Wale Oke,” Primate Ayodele declared.

The clergyman who had earlier foresaw the division of APC last week in his prophecy made it known that APC will break, as he has said it, the leadership of the party is divided by  Giadom and Elkana as both won’t settle for less for APC National Chairman cracker.

He went further stating that APC will break totally in 2023 if they don’t yield to the word of God and be prayerful.

It would be recalled that Primate Ayodele predicted the division in PDP before it came to pass.

He mentioned that Ajimobi won’t likely become the National Chairman because he presently needs serious players, It didn’t reveal to him that the former Governor of Oyo state, senator Abiola Ajimobi will occupy the seat due to his health status, stressing that Tayo Amusan also needs serious players to survive.

He said coronavirus is not yet over as it’s going to ravage all sectors including education, sports and political leaders, entertainment because the pandemic disease is still much. He also said President Buhari needs serious prayer due to his health.

He adviced the President of Federal Republic of Nigeria, Mohammed Buhari to sack all service Chief’s in the country as the insecurity of Nigeria is alarming.

Primate Ayodele said the service Chiefs are no more significant, they should be relieved from their duties if not Nigeria insecurity will increase speedily, there will be more bandits, attack. kidnapping will be common and insurgency will never get out of the country.

Primate Ayodele had also predicted the many trobles that rain storm has caused in the country.

The chao in Niger and other has confirmed Primate Ayodele’s prophecy as many buildings were damaged as a result of the rain storm.

Like in agege area of Lagos State the erosion many lost their lives in the flood, to confirm more of the cleric’s prophecies, on Monday 22 June, a teenager, 17-year-old girl, simply named as Ayisat, was swept away by strong flood at around Alapafuja area of the Surulere Low-Cost Housing Estate and it has been found.

Ayodele also said that all present and past Governors should be prayerful for their good health.