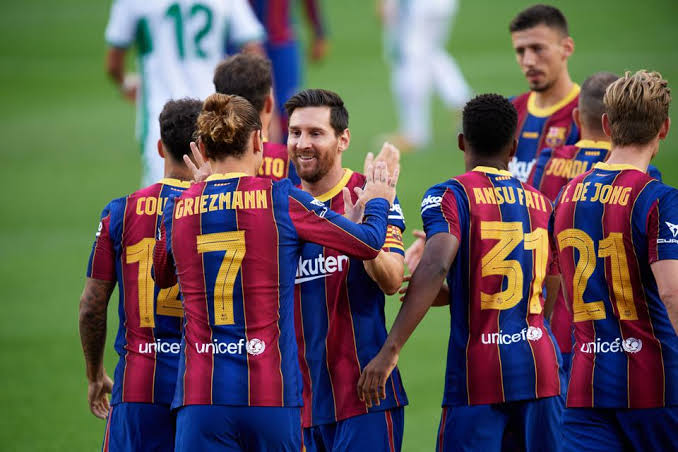 Barcelona has officially confirmed that Lionel Messi will miss their Laliga fixture against Eibar on Today at Cam Nou.

Reports disclosed that Lionel Messi will be sidelined due to ankle injury which will see miss atleast two other Barcelona fixtures in 2021.

Lionel Messi recently surpassed Pele record and currently has scored 644 goals for Barcelona in all competitions including 10 goals this season where seven were scored in Laliga fixtures.

Barcelona are currently 5th in the table with 24 points after 14 fixtures where they have won seven games and drawn three matches.

Lionel Messi will miss crucal moments when Barcelona had to prove they are still title conteders which is a shock to Laliga as Griezmann, Braithwaite, Dembele, Pedri and Ansu Fati have not raised to the occassion yet.

Real Madrid will be visiting Elche on Wenesday while neighbours and title challengers Atletico Madrid play Getafe with Diego Costa & Luis Suarez still available. Real Madrid yesterday won an award as Team of the Century ar Globe Soccer Awards and are still on top of Laliga log with 32 points on level with City rivals Atletico Madrid.

READ ALSO: Cristiano Ronaldo Gets Player Of The Century

Real Madrid forward and Laliga topscorer Karim Benzema who has scored eight goals and made five assists on level with Aspas & Moreno; will be availble for the end of the year 2020 fixture.

Win for Real Madrid away will make their title defence task a done deal as they will extend lead space between Barcelona and them to 11 points if the Catalonians fail to win at Eibar.

Real Valladolid, Osasuna & Huesca seem to have been destined for relagation as they anchor the Laliga Table Standings with less than 14 points in 15 fixtures.