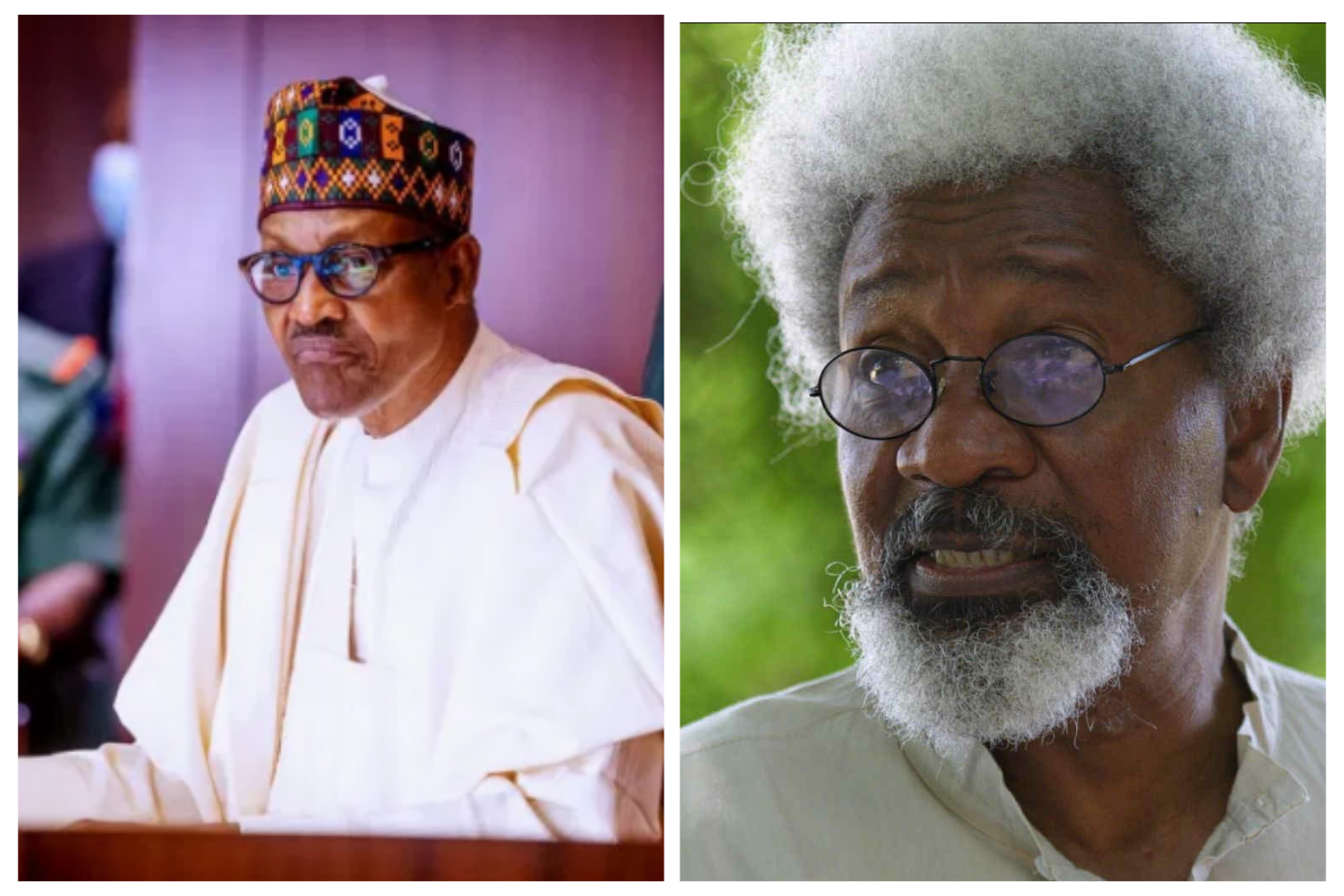 He said the President can’t end Boko Haram, bandits and kidnappers by “sitting down in Aso Rock.”

The famous Nigerian writer also advised the president as Nigeria being a “stage of desperation” should be willing to “pay people to come and help us” in defence against Boko Haram insurgents, bandits, and other criminal elements.

He called for a national mobilisation to fight the menace of insecurity disturbing the country.

Soyinka said Nigeria’s sovereignty had been taken away by Boko Haram terrorists, bandits and other criminal elements.

In a direct reference to President Muhammadu Buhari, the Nobel laureate said the President could not end the country’s insecurity challenge, sitting down in Aso Rock.

Soyinka said this while featuring on an Arise TV programme on Saturday.

According to him, Nigeria has reached the “stage of desperation”. The government should be willing to “pay people to come and help us” in defence against Boko Haram insurgents, bandits, and other criminal elements.

Soyinka said, “There are those on whose shoulders must be placed the primary responsibility and that include some former Heads of State who refused to see the inevitability of what we are going through right now.

“I am very glad that the northern elite is now speaking up, boldly and practically, (and are also) now taking measures which they should have taken years ago. They’ve moved beyond the unbelievable policies of actually paying killers to stop killing. I don’t want to mention names, but some admitted that they were paying protection money to killers instead of dealing with that cancer in the only way they should, which is excision, to take out killers instead of giving them money.

“So, let them get away with the issue of sovereignty. If they have to pay people to come and help us, then call them whatever you want. Please go ahead because we’ve reached that stage of desperation.

“But I will prefer a general mobilisation in which people are trained, farmers especially are trained to work with the hoe in one hand and the gun in the other hand, ready to protect their lives, their harvests and the rest of us.

“We are not unique; history is full of those situations. I would like to see a national mobilisation. Let’s be practical.”

Soyinka also said, “From a self-protective point of view, it is a common problem; it is a national, collective issue. Don’t just sit there and think that you can solve it from Aso Rock; no. This now concerns even the lowest common citizens in this nation because that lowest, that most impotent individual has become a prime target. So, it’s a collective issue. I’m not surprised some governors now say let us reach outside help; I have also said something. I don’t say mercenaries necessarily, but this has gone beyond a Nigerian problem.

The writer also warned that the Western Nigeria Security Network, otherwise known as Amotekun, must not transform into another form of the disbanded Special Anti-Robbery Squad.

Soyinka said Amotekun operatives must be trained in ethics to not end on the wrong side of history.

Soyinka said, “Community policing, like Amotekun, is recognition of the fact that the civic part of the entire national polity has got to wake up in not just its defence but also survival.

“I have told them that anytime they want us to come and assist; we will come even if it is just on the ethical session so that as you are training them to defend us, we are also training their minds so that Amotekun does not become another SARS – very important. We must do everything together.

“It is about time the public examined itself; what are we made up of? Are there those among us who, if they got into power, will behave exactly as those kinds of agencies which we are repudiating and against which we are protesting? There is no excuse for the brutality that occurred in the wake of the noise, rumour or reality of people being shot at the Lekki tollgate,” Soyinka said.