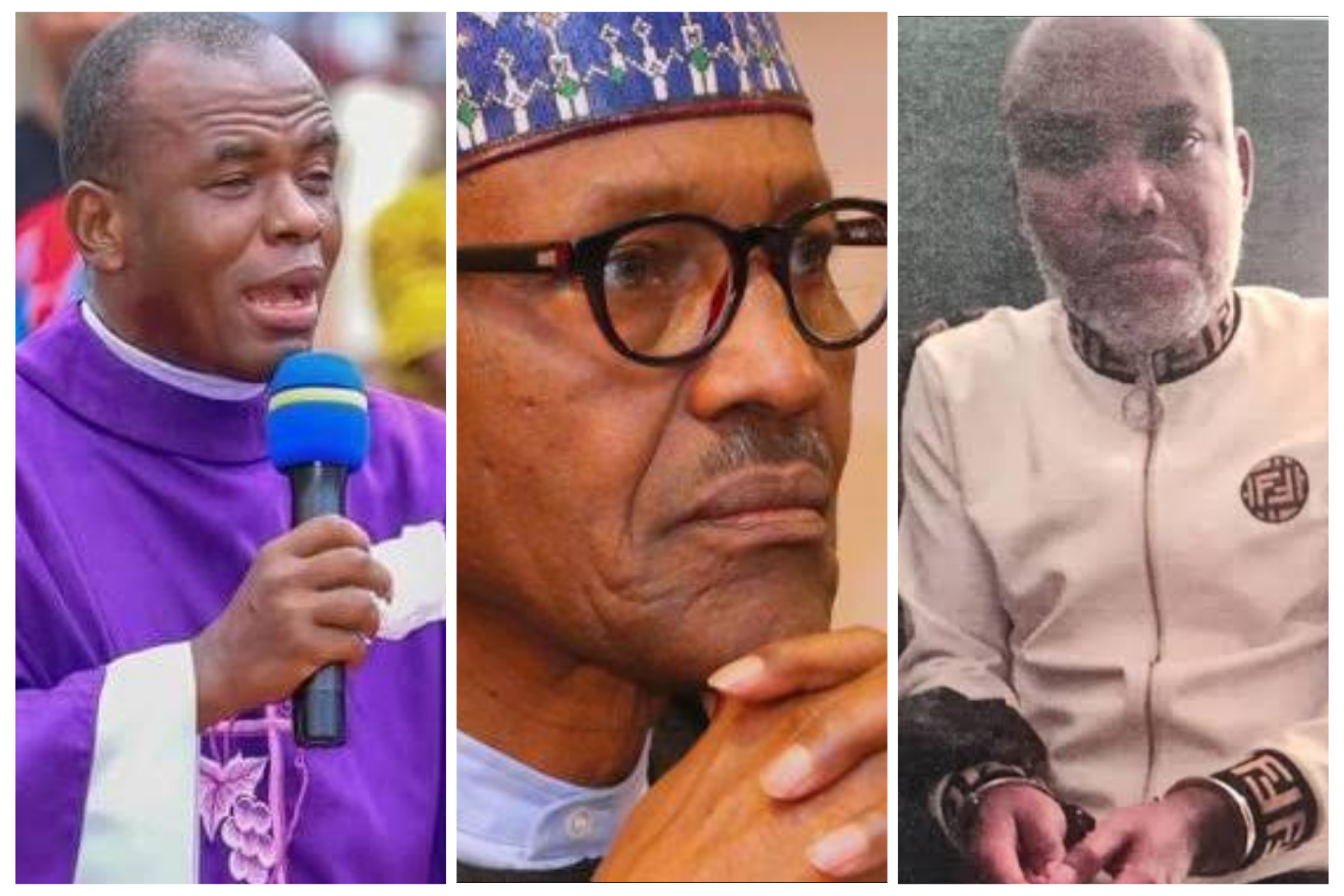 He prophecied in latest trending video.

Onyxnewsng reports that the Spiritual Director, Adoration Ministry Enugu, Rev. Fr. Ejike Mbaka has warned that there will be more trouble if the embattled leader of the Indigenous People of Biafra, IPOB, Nnamdi Kanu dies in custody of the Department of State Services (DSS).

This online platform understands that Father Mbaka made this known while calling on the congregation to pray for the release of the secessionist on Sunday.

The cleric, who commended IPOB for calling off its Monday sit-at-home exercise, said the danger of the order was becoming a problem instead of a solution.

Recall that IPOB had ordered the arrest of anyone found enforcing the already-suspended Monday sit-at-home order in the South-East.

The Media and Publicity Secretary of the group, Emma Powerful, said the group has long suspended the order and wondered why some people would continue to enforce an order that has already been cancelled by IPOB.

The cleric further stated that he was pleased that the intervention of stakeholders has yielded results with the cancellation of the lockdown of the entire region.

Commending IPOB, Mbaka said, ”The leader of the Indigenous People of Biafra, the hero, Nnamdi Kanu, is expressing his empathy with the people of the Southeast over what they are passing through. He came to know that Igbos are suffering because of him. And he would not wish that suffering to continue. Therefore, nobody should stop anybody from going to his or her business any Monday.

“All of us should keep praying for his (Kanu) release, and work towards his freedom because if he dies inside that place, it will cause more trouble. If he comes out, he will come out as a hero.

”We don’t want him to die, because it is not Nnamdi Kanu’s issue, it is the issue that concerns the people that are suffering. Nnamdi is not asking the government to do anything for him; he is speaking for the Igbo people.

“And we that are affected and he is speaking on their behalf should do everything possible to see that it is well with him.

“Many were saying they saw me at Abuja some days ago, yes. My own is if I am with you, I am with you. I will not sit here to tell you why I am in Abuja but whatever will make my people to be emancipated I will do it. There are people working to see that Nnamdi Kanu is released and it’s not by sitting. at home that he will be released.

”Canceling sit-at-home does not mean that it is over, the poor masses are suffering. Most of the rich people don’t have business over here, we are punishing our self. We thank the leader of IPOB, Nnamdi Kanu, may God bless him.”