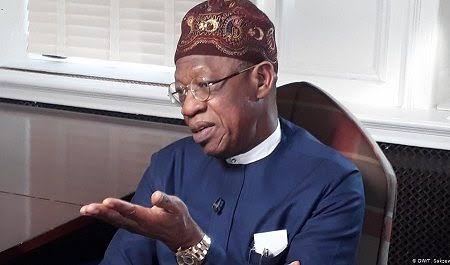 Aides of President Muhammadu Buhari in the Presidential Villa, Abuja and top officials of government have contracted Covid-19.

Government officials have also urged State House newspapers correspondents not to report the surge in infections at the villa.

According to Premium Times, those infected by the deadly virus include the permanent secretary in the State House, Tijani Umar; the President’s Aide-de-camp (ADC), Yusuf Dodo; his chief security officer (CSO), Aliyu Musa, his senior special assistant on media and publicity, Garba Shehu, the Minister of Information and Culture, Lai Mohammed, among others.

It was gathered that some of the infected officials had to be taken out of the cabinet meeting on Wednesday when the result of their polymerase chain reaction (PCR) tests came back positive.

Confirming the report, Garba Shehu stated that he is only afflicted with a mild variant of the COVID-19.

He however told Premium Times in the message that he could not confirm other cases mentioned to him.

Garba Shehu wrote; “I have no confirmation of the cases you mentioned, but yes I have been afflicted by the mild variant of the COVID-19.

I felt okay from the beginning, maybe because one had received all three jabs, and right now, I feel 100 per cent. I just finished my hour-long running exercise.

“But the strange thing about this ailment is that it is the scientists, not you, that will say you are okay. Right now, I’m taking my prescriptions and isolating and would go back for a test to ascertain if the virus is still here or it has left me. Thanks for your goodwill.”

Also speaking on the issue, the special assistant to the President on digital and new media, Tolu Ogunlesi, said he could not comment on the matter, referring newsmen to those he described as the government’s spokespersons.

However, reliable sources confirmed that Lai Mohammed and other affected officials are currently in isolation and are receiving medical attention.

This newspaper understands that due to the high number of officials affected by the pandemic, governance may have been affected at the centre.

Sources, who do not want to be quoted for fear of sanctions, said that the decision to shut down the office of the wife of the President, Aisha Buhari, earlier in the week, was not unconnected to the huge number of officials at the State House that was already confirmed positive for the virus.

The special adviser on media to Mrs Buhari, Aliyu Abdullahi, said though the situation was not part of the reason advanced for the early closure in the statement issued, it could also not “be unconnected to it.”

He, however, declined to either confirm or decline, saying the president’s wife may have taken the decision to avoid the spread of the virus.

Asked if the virus scare was part of the reasons for the early closure of the president’s wife’s office, Mr Abdullahi, after much hesitation, said; “Well, I think that is part of the reasons, though it wasn’t stated in the release announcing the closure. But that would be part of the reason. But this is also a holiday time and so the first lady might have felt that the office should close early to avoid a widespread.”

However, Mr Abdullahi said his statement never meant that he confirmed that anyone had contracted the virus, saying he didn’t have such information. “But you know it could be just a caution,” he said.

The Nigerian government on Thursday threatened it might be forced to impose fresh restriction measures to curb the spread of the virus as the nation on Wednesday recorded 4,035 new cases.

Wednesday’s figure has remained the highest daily number of cases recorded in Nigeria since the outbreak in the country in February 2020.

While appearing as a guest on “Kaakaki,” a morning programme on the Africa Independent Television (AIT) on Thursday, the director-general of the Nigeria Centre for Disease Control (NCDC), Ifedayo Adetifa, said in spite of the efforts by the government to sensitise Nigerians on the virus, many still doubt its existence.

He said the disbelief is quite a phenomenon that is making the war against the spread of the pandemic a difficult fight for the government.

He said; “It is quite a difficult phenomenon because, for some people, there is no evidence you can provide to convince them. We report infection records daily as part of the efforts of being transparent.

“Even the cases that we report are just underestimated because we simply are unable to test as many people as can be done in a well-resourced location.

It is everywhere, we all know, there are many people who have tested positive and isolated at home and the evidence we have is our surveillance system which now shows exponential rise in the number of cases.”

He said the disease that has claimed about 3,000 lives in Nigeria cannot be said to be phantom, saying only the affected families can tell of the consequences of the vacuum created by the departed.

Speaking on the curfew threat, Mr Adetifa said; “I am sad to report that already, it looks like in addition to the wave of confirmed cases, we may now be seeing an increase in the number of patients that have been admitted to isolation centres because people are not adhering to safety measures as advised and are not taking the vaccination.

“By that, we are allowing the transmission to continue in an unmitigated fashion which means that there is a risk that our health system might get overwhelmed, and if it continues, then the government may be forced to put in place, more stringent measures, that include restrictions of gathering and even curfews.”

The NCDC boss has also consistently advised Nigerians against losing guards while also urging everyone to take the vaccines as the only antidote available globally at the moment.

At a media briefing on Friday, Mr Adetifa said a total of 45 Omicron variants of the virus have been recorded in Nigeria, making Nigeria the third country with a high figure of Omicron cases in Africa.