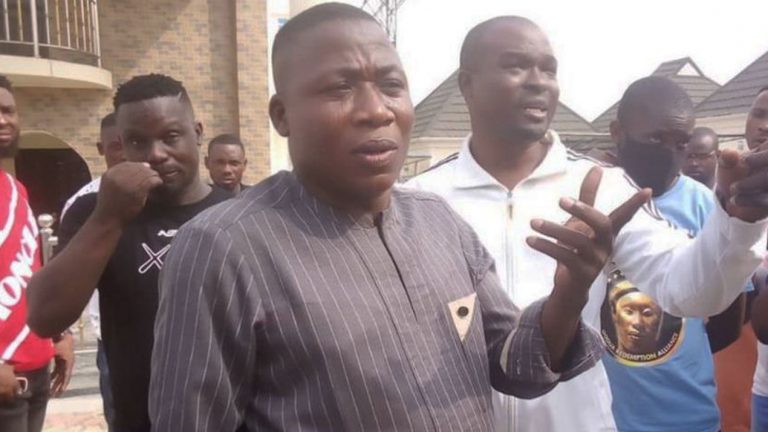 He was quoted as saying this in a statement by one of his counsels, Chief Yomi Alliyu (SAN), on Thursday.

The Yoruba rights activist also called on his supporters, especially his kinsmen at home and in the diaspora to embrace dialogue in their quest for self-determination “without heating up the fragile situation” in Nigeria.

Igboho said that he would continue to preach against war, considering the situation in Ukraine and some parts of the South-East in Nigeria.

He thanked all his supporters, leaders, and President of Republic of Benin, Patrice Talon, over his release from prison.

The statement read, “Sunday Adeyemo a.k.a Igboho Oosa thanked all that are supporting him, especially his leaders, Baba Prof. Akintoye and Baba Prof. Wale Adeniran and all Nigerians especially his people in Ilana Oodua and affiliates seeking self-determination.

“He continues to preach against war seeing what is happening in Ukraine and some parts of Igboland in Nigeria. He implored all, especially his kinsmen at home and in the diaspora, to embrace dialogue in their quest for self-determination without heating up the very fragile situation in Nigeria.

“He believes that their ambition will be achieved without firing a bullet as he used to say at rallies.

“He appreciates Chief Dele Momodu being the only Yoruba man of note that came to visit him in Cotonou prison. He remains grateful to the President of the Republic of Benin, President Talon, for releasing him from prison with a view to uniting him with members of his immediate family, albeit only in Cotonou for the time being.

“He assures all those in support of peaceful self-determination through a referendum that the struggle continues as he will not relent in his efforts in that regard.

“He pledged his eternal loyalty and respect to Chief Yomi Alliyu SAN who though an extreme Buharist and a nationalist who does not believe in balkanisation of Nigeria, exhibited extreme professionalism in taking up his case with DSS without a kobo and winning it with landmark award of #20.5billion dollars!”

Igboho who fled the country to avoid arrest was on Monday, February 07, given a conditional release from prison in Benin Republic eight months after he was detained there.

Sunday Igboho had been detained in Benin’s commercial capital Cotonou on accusations of “criminal association”.

The Federal Government has reportedly been seeking his extradition since July 2021, when he fled following a raid on his home in the city of Ibadan.

Department of State Services’ officials claimed they found military equipment and other weapons at the house.

Police at the time accused Igboho and his associates of planning to wage a violent insurrection against Nigeria.

He was arrested in Benin while attempting to board a flight for Germany.

Igboho had demanded independence for the Yoruba people following violence he attributed to Fulani herders in his region.