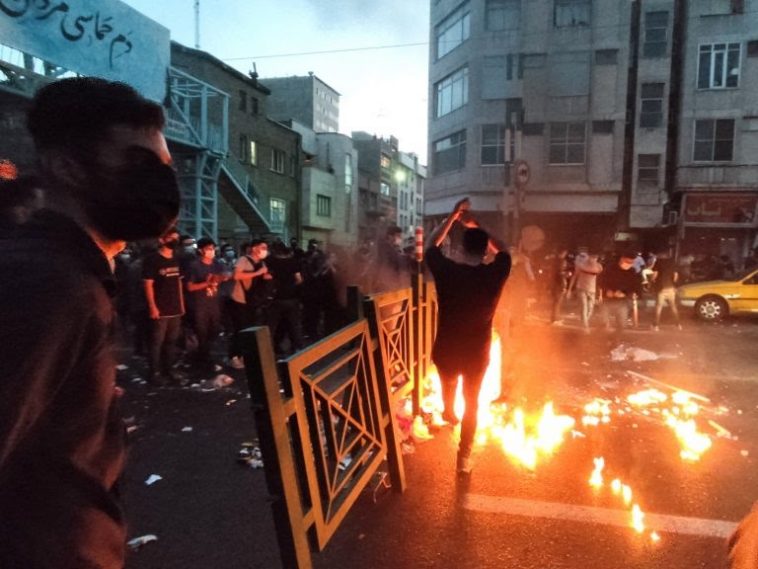 Iran restricted Internet access, on Thursday, 22 September 2022  after days of protests and unrest that have claimed at least 17 lives, following the death of a young woman in the custody of the morality police.Public anger has flared in the Islamic republic over the death last week of 22-year-old Mahsa Amini, who had been detained for allegedly wearing a hijab headscarf in an “improper” way.

Activists said the woman, whose Kurdish first name is Jhina, had suffered a fatal blow to the head, a claim denied by officials, who had announced an investigation.During six straight nights of protests, women demonstrators have defiantly taken off their headscarves and burned them in bonfires or symbolically cut their hair before cheering crowds, video footage spread on social media has shown.

“No to the headscarf … yes to freedom and equality!” protesters in Tehran were heard chanting in a rally that has been echoed by solidarity protests abroad.

Iranian women interviewed by Journalists on the streets of Tehran said they were now more careful about their dress to avoid run-ins with the morality police.

“Today, we stand with the brave citizens and the brave women of Iran who right now are demonstrating to secure their basic rights,” Biden told the General Assembly on Wednesday.

He was speaking shortly after world leaders gathered in New York heard a defiant speech from Iranian President Ebrahim Raisi.He pointed to the deaths of indigenous women in Canada as well as Israeli actions in the Palestinian territories and the Islamic State group’s “savagery” against women from religious minority groups.

“So long as we have this double standard, where attention is solely focused on one side and not all equally, we will not have true justice and fairness,” Raisi said.

Iranian state media reported that by Wednesday street rallies had spread to 15 cities, with police using tear gas and making arrests to disperse crowds of up to 1,000 people.In southern Iran, video footage purportedly from Wednesday showed demonstrators setting fire to a gigantic picture on the side of a building of general Qassem Soleimani, the revered Revolutionary Guards commander killed in a 2020 US drone strike in Iraq.Demonstrators hurled stones at security forces, set fire to police vehicles and garbage bins, and chanted anti-government slogans, the official IRNA news agency said.

“Death to the dictator” and “Woman, life, freedom,” protesters could be heard shouting in video footage that spread beyond Iran, despite online restrictions first reported by internet access monitor Netblocks.

“In accordance with a decision by officials, it has no longer been possible to access Instagram in Iran since yesterday (Wednesday) evening and access to WhatsApp is also disrupted,” the semi-official Fars news agency reported.

The two apps were the most widely used in Iran after the blocking of other platforms in recent years, including Facebook, Twitter, Telegram, YouTube and Tiktok.UN human rights experts condemned both the “use of physical violence against women” and the “state-mandated internet disruptions”.

“Disruptions to the internet are usually part of a larger effort to stifle… free expression… and to curtail ongoing protests,” they said in a statement.