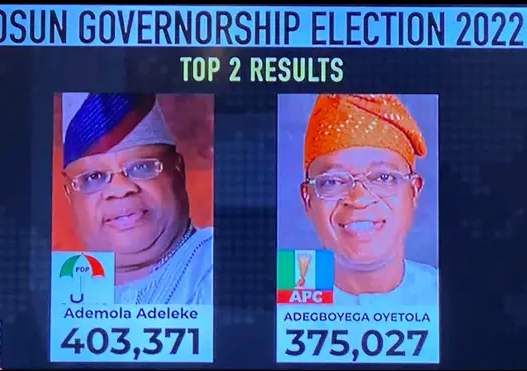 Ahead of the Monday Pre-hearing date given to the parties involved in the Osun Governorship Election Petitions, the Independent National Electoral Commission, (INEC), has admitted that there were indeed errors in the results it declared on July 17, 2022.

INEC’s position is contained in its response to the petition filed by Governor Adegboyega Oyetola and the Osun All Progressives Congress (APC), challenging the return of the Peoples Democratic Party (PDP), candidate in the contest, Senator Ademola Adeleke, as the winner of the July 16 election.

Oyetola and the Osun APC had on July 18 applied to INEC for a Certified True Copy, CTC, of the BVAS report deployed in the conduct of the exercise, and on July 29, the report was made available to the parties.

However, after approaching the Election Petitions Tribunal challenging results from 749 polling units out of the over 3, 000 polling units on the grounds of over-voting, INEC issued another CTC of BVAS report to the PDP on August 22, claiming that the first report issued to the APC was not ‘syncronised’.

The electoral body went further to admit that, “The BVAS Report dated 29th July, 2022 has errors because as a result of non-synchronisation with the BVAS machine and these errors resulted in false over voting in the 750 polling units challenged by the Petitioners.”

In its response filed before the Tribunal on its behalf by its team of lawyers led by Prof. Paul Ananaba, SAN, INEC said:,“There were lots of errors on the unsynchronized BVAS Report dated 29th July, 2022, as a result of non-synchronization of data information with the primary BVAS Machine as at the date of application and issuance which resulted in false over voting in the 750 polling units challenged in the petition.