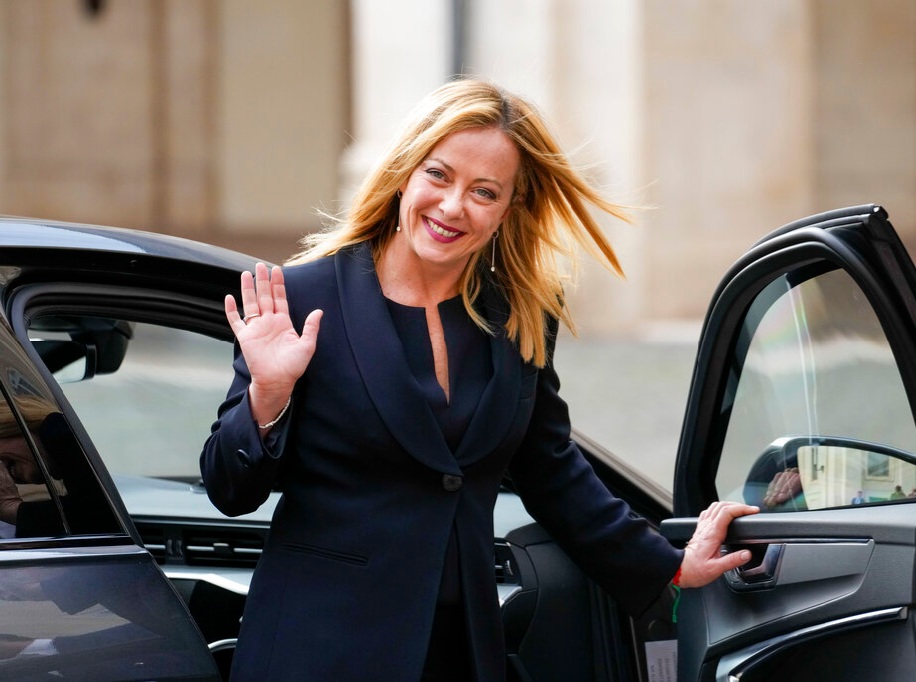 The government of Giorgia Meloni, Italy’s first female prime minister and leader of a party with neo-fascist origins, has been sworn in.

Meloni, 45, and her cabinet took the oath before the Italian president, Sergio Mattarella, on Saturday.

The political firebrand from Rome has taken the helm of Italy’s 68th government since the end of the second world war, and her Brothers of Italy party leads an alliance including Matteo Salvini’s far-right League and Silvio Berlusconi’s Forza Italia that holds the largest majority of any coalition government in the country since 1994.

Meloni will give a speech in parliament over the next few days and must win a vote of confidence in both chambers, more of a formality given the solid majority, before her government can assume full powers.

Meloni has appointed two deputy prime ministers – Salvini, who as a former interior minister enacted a draconian anti-immigration bill – and Antonio Tajani, the deputy leader of Forza Italia. Salvini is also minister for infrastructure, while Tajani, a former president of the European parliament, is foreign minister.

The coalition put on a united front during the election campaign, but the path towards creating a government was marked by simmering rivalries between Meloni and Berlusconi, the three-time former prime minister who described her as arrogant and bossy after they clashed over key ministerial posts.

The pair made peace last week, only for Berlusconi, 86, to spark further tumult after telling Forza Italia parliamentarians that he blamed Ukraine for the war with Russia and had rekindled his friendship with Vladimir Putin after the pair exchanged gifts and “sweet letters”.

Before receiving her mandate, Meloni reiterated that her government would be ardently pro-Nato and that anyone who rejected that “cannot be part of the government”.

The post of interior minister, which Salvini had wanted to reassume but Meloni vetoed, is taken by Matteo Piantedosi, a technocrat backed by all parties.

Reversing Italy’s dwindling birth rate and conserving the traditional family are key priorities for the coalition, and the new ministry of families, births and equal opportunities will be headed by Eugenia Roccella, a Brothers of Italy deputy who in 2017 said she wanted to either abolish or significantly modify laws approved by leftwing governments such as the 2016 civil unions bill, which she said had damaged the traditional family.

The 69-year-old rejected a law last year that would have criminalised homophobia, arguing that it compromised free speech. She defines herself as a feminist but said in August that “abortion is not a right”.

Francesco Lollobrigida, a distant relative of the screen legend Gina Lollobrigida and Meloni’s brother-in-law, has been appointed minister of agriculture and food sovereignty, while Adolfo Urso, another Brothers of Italy politician, is in charge of the ministry for “businesses and made in Italy”.