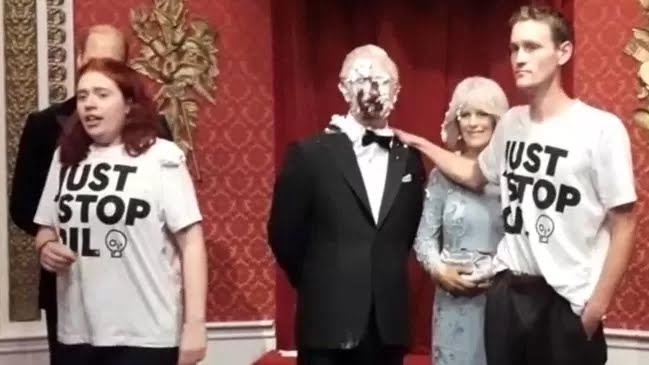 The Metropolitan police said four people had been arrested for criminal damage.

Madame Tussauds said: “At approximately 10.50am today (24 Oct), protestors entered the ‘World Stage’ Zone at Madame Tussauds London and appeared to throw what is believed to be cake at our figures of The Royal Family.”

“Our security team dealt with the incident quickly and we are working closely with the Metropolitan Police on this matter. The attraction remains open, with our Royal Family set closed temporarily.”

The PA news agency reported the protesters were calling for the government to halt all new oil and gas licences and consents.

“Last year, at [climate change conference] Cop 26 in Glasgow, Queen Elizabeth said: ‘The time for words has moved to the time for action.”’

Ms McFadden added: “The science is clear. The demand is simple: just stop new oil and gas. It’s a piece of cake.”

The King had planned to travel to Egypt for Cop27, but has since cancelled plans to do so after it was claimed former prime minister Liz Truss warned him against attending.

It follows a similar protest earlier this month involving Van Gogh’s Sunflowers at the National Gallery.

Activists threw tomato soup over the famous painting, which has since been cleaned and put back on display.

The gallery said the painting was covered by glass and therefore not damaged.