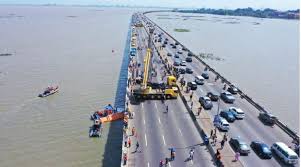 The lady whose report went viral after jumping into Lagos Lagoon today is Adetutu Adedokun, a State Security Service officer.

Adetutu reportedly jumped into the lagoon after having a heated argument with her fiance on phone.

According to the information revealed by her close friends, Adetutu Adedokun, is a staff of Department of State Service, she joined three years ago. An UnarmedCombat (UAC) Instructor.

It was also revealed that she got good commendations from her work last month. And fiancé who is based in Abuja proposed to her few weeks ago.

It was also gathered that four months ago, Adetutu got commendation from the DG, DSS, as the best unarmed combat operative in her set.