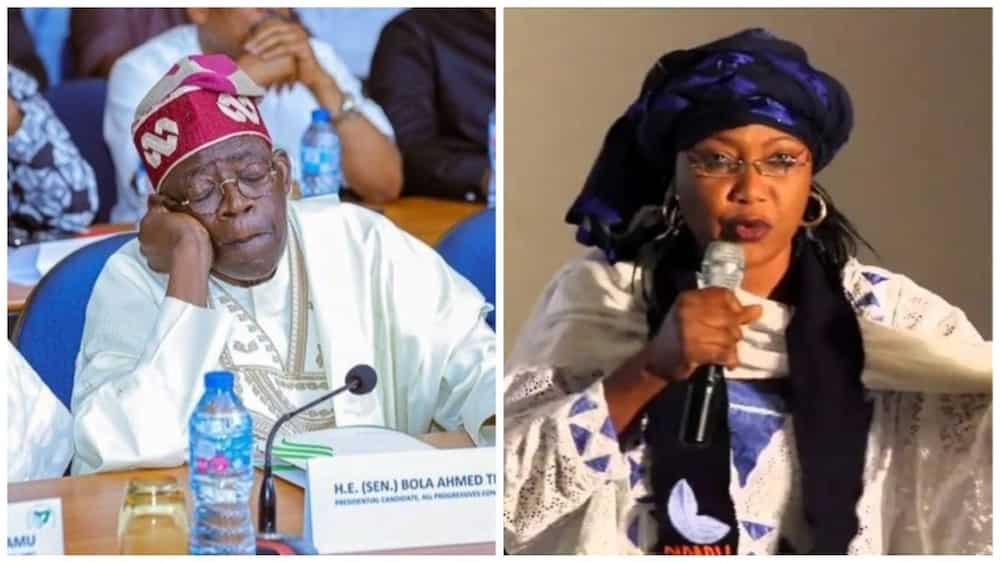 Najatu Muhammad, an ex Director of the Civil Society of the All Progressives Congress Presidential Campaign Council (APC-PCC), has explained why she dumped the ruling party presidential candidate, Bola Tinubu.

Najatu, on Saturday, January 21, 2023, resigned from her membership of PCC and APC by extension, adding that her decision was hinged on “much reflection and careful consideration.””

However, in an interview with an online newspaper, THE WHISTLER, she claimed Tinubu is suffering from dementia.

According to her, the APC candidate is not only physically unfit to lead the nation, but he is also mentally unfit.

Speaking on the reasons for dumping the ruling party, Najatu opened up on the health conditions of the APC presidential candidate, saying that the times she visited him in London, he demonstrated clear symptoms of dementia

She explained how Asiwaju sleeps all the time, “Asiwaju that I sat with for two hours, he slept most of the time, it was Bisi Akande that I was really talking to. Most importantly, he is not only physically unfit, he is mentally unfit, whether we want it or not, this is the truth. It’s not that I hate him, I respect him because I have heard of one or two people that he assisted, which is good.

“But when you talk of leadership of over two hundred million people, you know that if you remove tribal sentiments, you know that he is incapable. Those that will rule are those around him. This is the reality. He is mentally deranged – I said it!

“I sat with him for two hours in London, when you talk of green, he will give you an answer of red, he can’t even decipher, he has very serious dementia, I believe he has Alzheimer’s because he cannot even hold a cup of tea.”

She further argued that the APC candidate would not dare contest, had he being from the north. “If you remove tribal sentiment, if you remove the Lagos/Ibadan press, if Tinubu were not a Yoruba man, he will not dare contest election because they will crucify him, but people are all there to defend him because he is Yoruba, it’s egbe omo Oduduwa over everything else.

“I was in the campaign for Yola, and we had to beg them to take the mic from hi. Everything about Tinubu is based on lies. Imagine he is a Hausa man. Will he contest elections with all these gbese on top of him? In this campaign, nobody should talk of corruption because they are corruption personified.”

I Have Nothing For The North – Tinubu

Najatu Mohammad, who disclosed she had not met Tinubu again since after she accepted the appointment to serve in his PCC, told The Whistler that the APC candidate had no plans for the North despite the myriads of problems confronting the region.

Recalling her London meeting with the APC candidate, Mohammad said, “I asked Tinubu, “What do you have for us in the north? He looked me in the face and said “Nothing.” I said, “Sir, you mean you have nothing for the north? The question of security, out of school children, agriculture, and many things like that, everybody in the northeast is waiting to be killed or kidnapped?”

“He said, ‘If I give you my blueprint, I will be subjecting myself to all kinds of things, sometimes they might even kill you.’ I said ‘Who are they? Sir, you have to have a blueprint. He said he had no intention of making a blueprint until he won the election.’ I said then, there will be a lot of distraction, this is exactly what has happened to Buhari, every time we go out it’s about how we get power not about how to utilise it. He said if I had anything the north would need, I should bring it to him so he can put it in his manifesto.

“I said that was fair enough, but I told him that we have a network led by Sanusi Lamido. He said that was okay and asked if we should go meet him in Paris. But I told him I would do that. So, the next day, I went to Paris and I called Sanusi and I told him I’m in Paris, he said he was sorry, that he was in Monaco. So, we agreed I should go back to London and wait for him. So, I went back to London about four or five days after he met with me. He was kind and humble when he came to my hotel, and I told him everything that transpired between myself and Asiwaju.

“He encouraged me and gave me a breakdown of what we should have. The question of the Almajiri; they are the ones that are used as cannon fodder, banditry, and then the economy, agriculture, and our currency. Do you know, I compiled these things till date I have not been allowed to deliver to him.

“So, you can see how patient I have been. I told Asiwaju I have no business being a zombie, I can’t be following you because you are Asiwaju, I don’t care who you are, and I can only follow Allah. Because anyone that does not put himself on the scale of God, unto whom he will return, I think that person is a sick person.

“I’m 66 years old, and at this age, I can not go killing, stealing, and so on, to get what? At what age? He has not reached out to me up until now. I tried sir Bisi Akande, I tried convincing Ibrahim Masari, I begged him because it was through him that I got to Asiwaju when I came to London, he was the closest person to him we know up north. I said, ‘Please what do I do with these things I have written?’