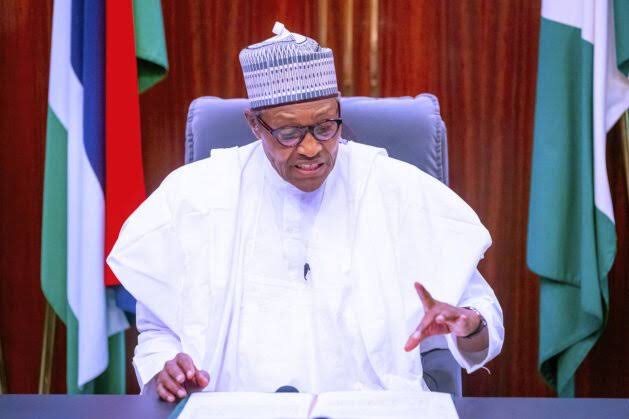 President Buhari has threatened to deal with the Igbos.

Onyxnews reports that Nigeria’s President Muhammadu Buhari has threatened to deal with the youths of Igbo-dominated South-East in a manner similar to the violence visited upon the region’s civilians by him and other military officers who fought on the Nigerian side during the Civil War.

This online news platform understands that President Buhari made this comment on Tuesday, June 1, where he added he has had enough of the raging attacks against government facilities across the South-East. Violent thugs have been on the rampage in the region, killing and setting public and private assets on fire. The president has previously warned that there would be consequences for the attacks, and security forces have been combing the region in a deadly pursuit of pro-Biafran elements.

President Buhari increased his condemnation of the violence on Tuesday night and said it was obviously being carried out by those who did not witness the Civil War between 1966 and 1970 when Nigerian troops waged a war against Biafran secessionists.

Recall that about three million people were reportedly killed during the war, many of them rounded up by Nigerian soldiers and shot at close range while hundreds of thousands were starved to death. Although the war was not properly documented, several accounts with substantial corroboration indicated how Nigerian soldiers massacred Igbo civilians in Asaba, Onitsha, Enugu, amongst other communities in the region.

The war ended in 1970, but historians are still lamenting the country’s failure to ensure a proper reconciliation 50 years on.

President Buhari, alongside Murtala Mohammed other controversial military officers of the Muslim-dominated northern region, was documented to be involved in the bloodshed at the time while fighting to keep Biafra as part of Nigeria.

Amidst widespread talks for him to do something about the violence that has embraced all parts of Nigeria, President Buhari on Tuesday, singled out the South-East with threats of violence.

Since President Buhari came took over office, he has consistently excluded the Igbo, one of Nigeria’s three major ethnic groups, from his government, apparently in line with his comments shortly after being assuming office in 2015 that they will not benefit much from his government because they did not vote for him.

“Many of those misbehaving today are too young to be aware of the destruction and loss of lives that occurred during the Nigerian Civil War,” President Buhari said on Twitter. “Those of us in the fields for 30 months, who went through the war, will treat them in the language they understand.”

SEE ALSO: BREAKING: What Miyetti Allah Planned To Do In South East

In the area of security, we have changed the Service Chiefs and the Inspector-General, and we are demanding that they rise fully to the challenges confronting us. There must be zero tolerance for all those those bent on destroying our country by promoting crime and insurrection!