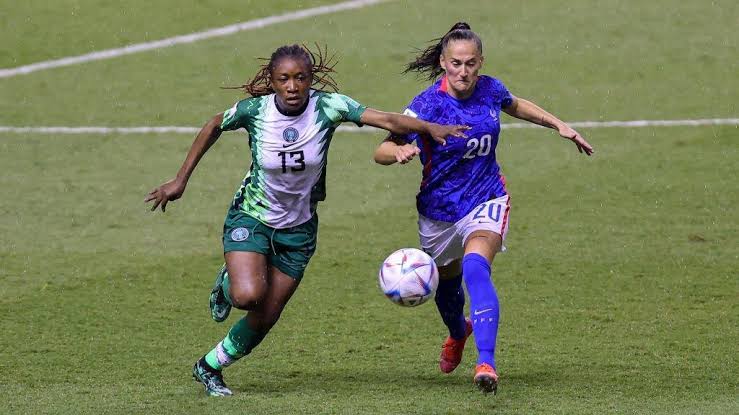 Nigeria’s Falconets got their campaign at this year’s FIFA women’s World Cup in Costa Rica off to a winning start after edging France 1-0 in Group D opening game.

The game which was played in the early hours of Friday saw Flourish Sabastine get the only goal late in the second half.

Next up for the Falconets is a second Group D clash with South Korea on Sunday.

The Falconets were awarded a free kick close to the edge of the French box but goalkeeper Marie Petiteau came out to save the dangerous swung in effort.

In the 10th minute France had the first attempt on goal but skipper Laurina Fazer’s shot was well claimed by Falconets keeper Omini Oyono.

On 20 minutes the game was suspended by Mexican referee Francia González due to heavy rain.

The game resumed and it was France who almost broke the deadlock on 23 minutes from a dangerous corner, with the Falconets keeper misjudging the flight of the ball but the defence cleared the danger.

It was the turn of the Falconets to threaten aft Deborah Abiodun tried a long range strike which went wide.

On 39 minutes the French could have taken the lead following a goal mouth scramble but a Falconets player made a timely block before the rebound was cleared to safety.

In the 54th minute Esther Onyenezide tried a long range left foot shot but it was well saved by the French keeper.

Falconets had a big chance on 58 minutes through Mercy Idoko but she was denied by France keeper.

Oyono in goal for Falconets was called to action in the 63rd minute as she stopped a superb long range strike.

With 20 minutes left to play France went on a counter but Oyono came out to stop a dangerous cross with her leg.

In the 81st minute France thought they had scored from a corner but after consultations with VAR the goal was overruled for a foul on the Falconets keeper.

In the 85th minute the Falconets took the lead through Flourish Sabastine who ran on to a through pass from Idoko before slotting past the French keeper.