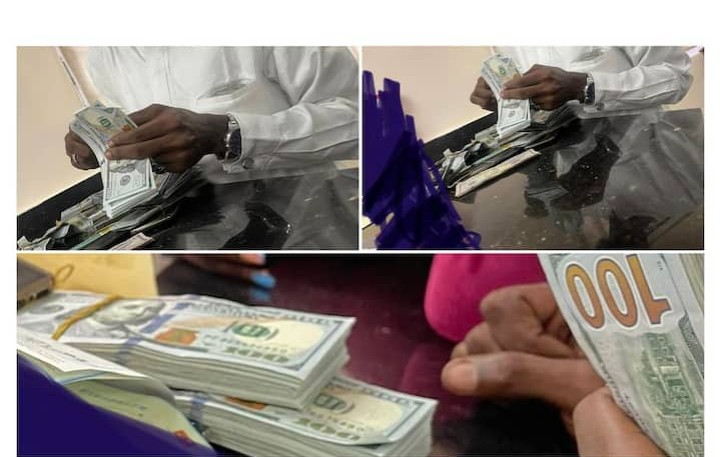 A Nigerian man has triggered talks among customers in a bank when he went to deposit $500,000, which is about N200 million.

The picture of the unidentified man has circulated the social media.

Is this a breach of Money Laundering Act?

The picture was taken in an unknown bank in Nigeria and has left many bewildered about why such an amount of dollars would be hoarded or kept by an individual.

is not clear if the person had violated the money laundering act as Nigeria grapples with dollar scarcity which previously led to the crash of the naira.

Recall, the Central Bank of Nigeria reportedly pulled $1.8 billion from the external reserves to shore up forex liquidity, leading to a decline of the reserves.

One person responded: “Don’t envy him. Do you know if he might be a kidnapper, terrorist or bandit? They are the ones rolling in ransom dollars now”.

According to Yishau, the rumour that the US cautioned that some of its denominations printed on certain years, especially those below 2021, won’t be accepted has spurred many into flooding the markets with the dollar.

A currency trader in Lagos, Ishaya Abdul, said that currently, there are so many dollars in the market. He said many forex traders are disposing of the dollars as the purported threats by the US swirl around. He said: “What is happening now is that most FX traders are releasing the dollars they have hoarded in the past. Right now, the dollar is crashing very fast.”