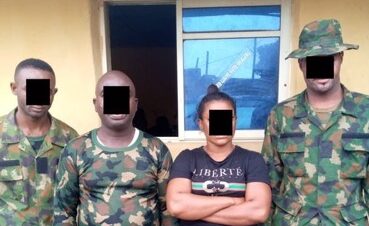 Two fake soldiers were apprehended by detectives working for the Police Command in Lagos State.

Benjamin Hundeyin, who serves as the Police Public Relations Officer (PPRO) in Lagos, issued a statement in which he confirmed the arrest.

According to Mr. Hundeyin, one of the suspects, Oluwatosin Gabriel, age 39, was taken into custody during the process of enforcing the total ban on motorcycles in certain regions of the state. He claims that an investigation conducted by the detectives resulted in the arrest of the second suspect, Nurudeen Agboola, 35, who is suspected of being a provider of military uniforms.

According to him, some of the items that were recovered from the fake soldiers and his supplier included nine live cartridges, four pairs of military camouflage uniforms, military identification cards, police accoutrements, and charms.

“An investigation into the nature and scope of their criminal activity is currently underway.

After the conclusion of the investigation, he stated, suspects would be arraigned in court.

According to the spokesperson, the Commissioner of Police, Abiodun Alabi, praised the detectives for the excellent work that they had done.

He issued a call to the officers and men under his command, urging them to redouble their efforts in order to maintain the state’s safety and security.

The police in Lagos have arrested four fake soldiers in the Iju area of the state.

Benjamin Hundeyin, a spokesperson for the police department in the state, stated that there are four people under suspicion, three males and one female.

According to a tweet sent out by Mr. Hundeyin on Sunday, “Officers of Iju Division led by the DPO, CSP Gbenga Stephen, arrested four fake soldiers in the Iju area of Lagos State at approximately 1:30 am today.”

Samuel Abel, age 28, Victor Ljeemai, age 35, Lukman Salabiu, age 43, and Oyinyechi Macus, age 30, are the phoney soldiers who were apprehended in a Mazda3 saloon car, according to the police.

According to the statement made by the police, they have been handed over to the State Criminal Investigation Department (SCID) in Yaba for additional investigation.