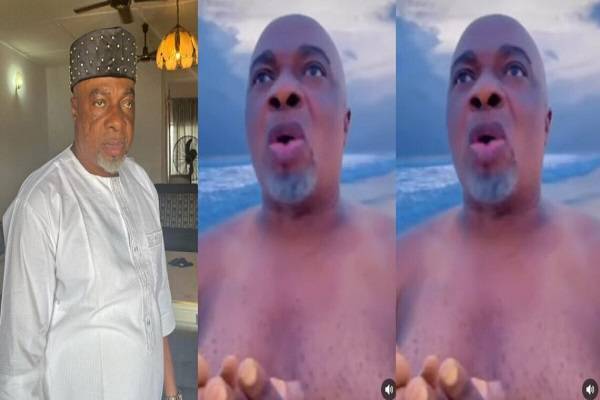 Veteran Nollywood actor Ebun Oloyede, also known as Olaiya Igwe, has spoken out about his controversial n*de video that went viral and caused a stir, particularly on Nigerian social media.

It should be recalled that Olaiya was seen praying for Bola Ahmed Tinubu, the All Progressive Congress (APC) candidate for president, in a video while completely nude.

The Actor’s actions sparked a great deal of controversy because many Nigerians denounced them as unnecessary, shameful, and inappropriate.

In the midst of the controversy, the actor made an appearance on the well-liked TV programme “Tu Mirada,” where he discussed the cause of his beachfront n*dity.

Olaiya claimed that his action was motivated by a spiritual call; he added that a voice had instructed him to pray for Tinubu on the beach.

Supreme God, “I was asked to stand up and do it spiritually,” the actor remarked.

He continued: “I have a revelation gift from the All-Powerful God. I occasionally know what God has in store for me before it occurs. The voice said to me, “Please get up, you said you love Asiwaju, and he has been helping you,” as he was sleeping that day. I affirmed. Rise, go, and complete this for him. He added that he owes no one an apology and that he does not.

“I did it on purpose because I heard the voice asking me to, and I do not regret it. I will go as far as it takes to support Asiwaju, as long as he thinks this has nothing to do with anyone else,” he said.

Olaiya went on to refute numerous assertions that he received payment for his actions. “I purposefully captured that event on camera for everyone to see,  the seasoned actor clarified, adding, “It is not for money.”