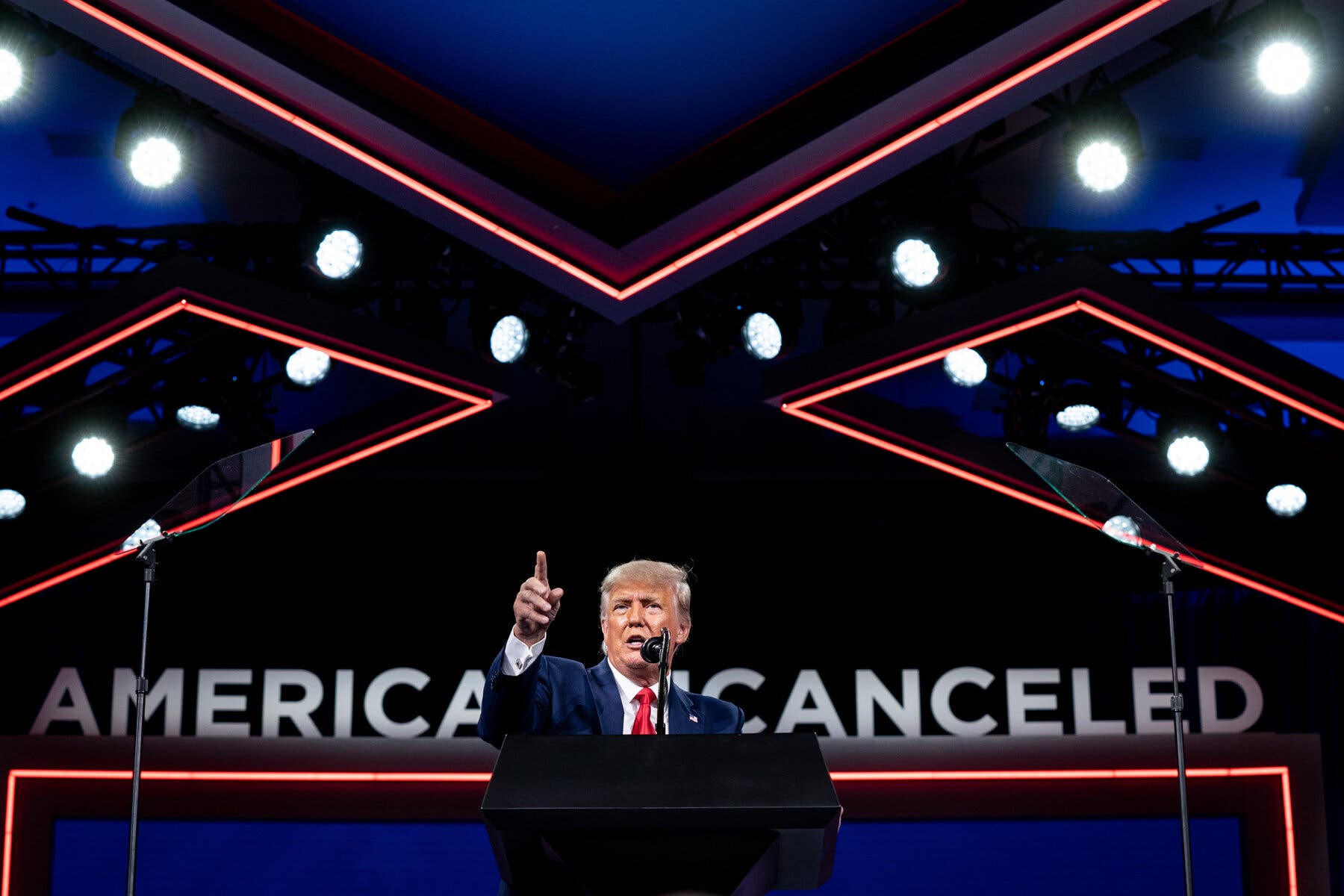 Donald Trump lashed his successor on Sunday, excoriating Joe Biden for what he called “the most disastrous first month of any president in modern history” and suggesting he may run again in 2024.

Speaking at the Conservative Political Action Conference in Orlando, Fla., Trump repeated his false claim that he won the November election — which he lost decisively — and said to an explosion of applause, “Who knows? I may even decide to beat them for the third time.”

The speech, Trump’s first major address since the end of his presidency, served as formal notice of his continued dominance over the Republican Party — and a return to campaign form for the former president.

About 90 minutes, Trump chastised “top establishment Republicans,” “RINO’s” and other Republicans who have criticized him. Banned from Twitter, he said Big Tech companies “should be punished with major sanctions whenever they silence conservative voices.” And in a wide-ranging critique of Biden’s first month in office, he lit into the Democratic president for his handling of everything from the coronavirus vaccine distribution to immigration, education and protections for people who are transgender.

“None of us even imagined just how bad they would be and how far left they would go,” Trump said, calling the Biden administration “anti-jobs, anti-family, anti-borders, anti-energy, anti-women and anti-science.”

“In just one short month, we have gone from ‘America First’ to ‘America Last,’” Trump said.

His own accomplishments, the twice-impeached president said, were superior both in terms of government and politics. Trump credited himself with his party’s down-ballot successes in November, despite many down-ballot Republicans over-performing him in their districts.

He predicted the Democratic Party would suffer “withering losses” in the midterm elections and that in four years, “A Republican president will make a triumphant return to the White House.”

He added, “And I wonder who that will be?”

When he said, “This election was rigged,” the crowd chanted, “You won!”

Trump’s comparison of his own presidency to Biden’s belied his successor’s relatively high public approval ratings — and Trump’s poor ones. But CPAC is an accommodating crowd.

In the annual CPAC presidential straw poll released shortly before Trump spoke, 95 percent of conference attendees said the GOP should continue with Trump’s issues and policy ideas, and 68 percent of attendees said Trump should run again in 2024.

In a crowded field of potential primary contenders, Trump crushed the field with 55 percent support, followed by Florida Gov. Ron DeSantis with 21 percent. Every other GOP politician polled registered in single digits.

“Get rid of them all,” Trump said.

Still, Trump described the dispute within the Republican Party as a limited one: “The only division is between a handful of Washington, D.C. establishment political hacks and everybody else all over the country,” he said, adding, “I think we have tremendous unity.”

Trump’s re-emergence in public life was, for the celebrity-turned-president, never in doubt. But it was yet another break with tradition for Trump, as presidents leaving office typically recede from partisan politics for a period of months immediately afterward.

Banned from Twitter and relegated from the White House, the former president reveled in the praise lavished on him at CPAC.

Taking the stage at CPAC, he said, “Do you miss me yet?”

The audience erupted, at times chanted, “USA! USA!.” Later, it broke into a sustained call of “We love you! We love you!”