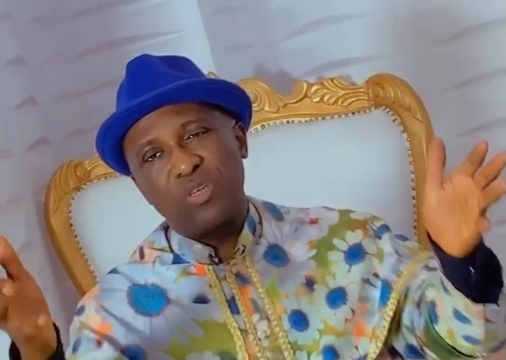 As it is usual of him to be the first to release new year prophecies among prophets in the country, Onyxnewsng understands that the leader of INRI Evangelical Spiritual Church, Primate Elijah Ayodele has released powerful prophecies for 2022.

The powerful prophet made the presentation of the 2022 prophecies on Wednesday, December 22, 2021 at his Lagos church.

The 90-paged 2022 prophecies signed by his media aide, Osho Oluwatosin, featured topical revelations and issues about all sectors of the societies in Nigeria and around the world on politics, governance, economy, education, sports, security, to mention a few.

Prophesying about the world as a whole, Primate Ayodele said: “the spirit of God says a lot will happen in 2022 which will really affect the World leaders. I foresee issues like economic instability, insecurity, health related problems and climate change crises. I foresee that in 2022, some countries of the world from the various Continents especially the African Continent and Nigeria in particular will have so much to contend with; these are issues that will affect the countries internally and externally. The spirit of God revealed to me that we are going to have 160 days that will not be palatable in some parts of the world, the African Continent and Nigeria. The 160 days in Nigeria and Africa will be terrible because Corona virus—Covid19 upsurge will take another dimension. The spirit of God says Strong wind will cause destructions in different parts of the world and also in Nigeria. I foresee there will be a new disease that will surface in the world.

Let us pray not to lose of an ex-president and a sitting president either that will slump or have health crises. Let us pray against military coup in some parts of Africa and the world. I foresee the world will not be at peace as so many things will come up.

I foresee that a top footballer, a Musician and a boxer will pass away in the world. I also foresee the death of a renowned Poet Writer. The spirit of God says we need to pray so as to avert all these negative signals in the year 2022.

AFRICA AND THE WORLD AT LARGE

Releasing prophecies about Africa and the world as a whole, Primate Ayodele stated that: Africa will fight for their Rights especially from the slave trade era. They will call for the release of some of their artefacts and assets from the white people and also take them to court. There will be slavery, child trafficking, human trafficking, racism and false labour. Government will be given a summit of world leaders to discuss about the aforementioned so as to seek for lasting solutions The world leaders will be so troubled about the global economy because so many countries will not be able to sustain themselves. The world leaders will look for possible means to see how they can tackle the world economic crises that will be fluctuating. Africa Nations will be affected by all these crises and banks, insurance and some capital market companies that are not healthy will shut down There is a need to push for a global conference to discuss global issues. United Nations and the European Union will be troubled. America will engage in a lot of mediation to promote peace. Some countries will be troubling the world such that the world leaders will be unstable. Some countries will be experiencing climatic problems caused by natural disasters that can lead to sudden deaths. It can be caused by heavy rain that will destroy lives and properties. In addition, some countries will be affected by storms, volcanoes, tornadoes, hurricanes in the different parts of the world.

Primate Ayodele foresees plane crash, according to him: “I foresee a major security threat, troubles and plane crash in the World. I foresee that an American, Canadian, Turkish, Chad, Cameroon, Uganda, Uzbekistan, Iran, Afghanistan, Russian and Nigerian Air force so that any of this aircrafts will not crash. I foresee a Military Base attacked in Africa. Mali, Burkina Faso, Central Africa Republic, Chad, Uganda, Burundi, Guinea, Cameroon and Nigeria must be very careful so as to avert an attack on their military facilities.”

Prophesying about Nigeria, the popular Prophet said: “Some PDP core cabals will gang up against the new chairman. PDP must be very vigilant so that they won’t make mistakes which will affect their chances of coming to power. I foresee there will be devolution of power in Nigeria in the future. The Honourable Speakers in the States House of Assembly will do things on their own as Rules will not pass through the offices of governors any longer. People will not accept autonomous power. Buhari government will fail to address the problems of insecurity, corruption, Fulani herdsmen attacks and many more. Nigerians should expect so many things towards 2023 election that will stand as a miracle or a mirage so says the Lord. Some states will collapse because they will not be able to meet up with the needs of the workers because of debt. This will more pronounced in the year 2022, where some states will be begging for bail outs from the Federal Government while some states will borrow because they don’t have enough money to control and manage the affairs of the state.

Government will run after some churches in Nigeria. People will protest against stray bullet by the Police Force I foresee uprising, uproar and killings in some parts of Nigeria. There will be attacks and confusion in some parts of Nigeria. The spirit of God says the economy will remain unhealthy. Crises will erupt in schools to the effect that students will be kidnapped, strange attacks on students and school premises. Let us pray against attacks on the Palace of Emirs, strange killings targeted at important personalities (Police, Honourables, Senators, Business tycoon and even ordinary people) even as the spirit of God says Church premises must be guided and protected as uncertainties and insecurity will loom large.

He spoke about sudden death of people, “I foresee that some political gladiators, prominent celebrities and business tycoons will pass away. Let us pray against the death of a serving Judge and a onetime Judge, a onetime Chief of Staff, onetime Senate President and a onetime Speaker of House of Assembly. Let us rebuke the death of a former Central Bank governor, a Professor, a former Rector and also pray against the death of a sitting President in Africa. Let us rebuke the death of a onetime President. Let us pray not to record the death of a sports writer, a journalist, a Publisher, a General Overseer, a popular Preacher, any Presidential Aide and an Educationist. Let us pray against any sickness that will affect a sitting governor and a sitting President. Let us rebuke the death of the wife of a former President. We must pray against multiple deaths as a result of attacks on schools, kidnapping of lecturers, students and expatriate workers. Let us pray so that God can avert all these dangers. There is need for Nigeria to go into serious prayers to avert uncertainties and events that can create tension in the country. I foresee that series of things will be happening that will be scarring. Thus, there is need to come together to fast and pray on the 1st to 7th January and 1st to 7th February 2022 so as to prevent calamities and disasters in our country and the global world.

I foresee that Nigeria will close down its Embassy in one foreign country. Nigerians must pray against fire outbreak and attacks in any government secretariat both at the Federal and State level.”