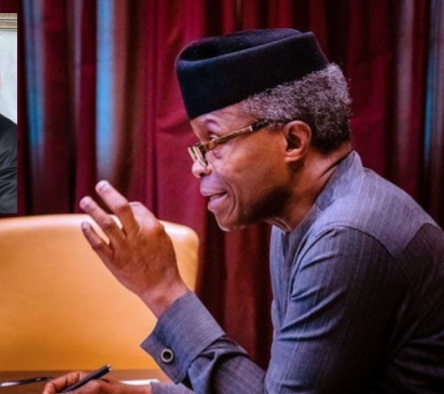 Vice President Yemi Osinbajo on Thursday distanced himself from a memo purported to have originated from his office and sent to President Muhammadu Buhari seeking permission to resign his membership of the All Progressives Congress (APC).

The Memo dated 24th June, 2022 with reference number SH/VP/605/2./0 and seen by The Guardian, listed among others, family pressure, his (Osinbajo) continuous participation in active and partisan politics and membership of the APC as the reasons for his decision.

But, when asked to confirm the authenticity of the said memo, Senior Special Assistant on Media and Publicity, Office of the Vice President, Laolu Akande, described it as fake.

According to him, the language of the author of the memo is not that of Vice President Osinbajo, pointing out that his boss would not write a memo so full of errors.

“Where do you people even get these things from? Who gave it to you? Anyways, for the avoidance of doubt, the memo is fake. VP didn’t write any such thing,” he said.

The Memo with the heading, Permission To Resign From APC, and purportedly signed by Vice President Osinbajo read: “I have the honour to inform you that for sometime now, I have been having series of meetings and pressure from my immediate family members on some matters. One of the issues borders on my continuous participation on active and partisan politics, and by extension, my continuous membership of our party, the All Progressives Congress, APC.

“As a father and great member, whom without you, I would not be where I am today, regrettably, I write to seek for your permission to resign my membership of the All Progressives Congress, APC. However, if the timing of this plan is not convenience or acceptable by Your Excellency, I will surely abide by your decision and advice, which I will consider to be the final.

“Please accept the assurances of my highest regards and loyalty.”