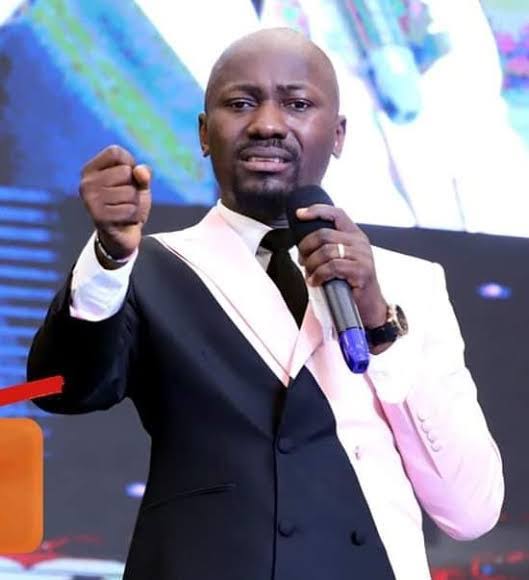 What is a preacher supposed to look like?’ I didn’t know they had a specific style code,” Brother Gift, took a jibe at this interviewer when approached to speak on his General Overseer, Apostle Johnson Suleman’s new haircut and regular trendy dressing.

“There’s nothing naturally wrong with a man of God having a trendy haircut or adorning a Brunello Cucinelli suit and Brooks Brothers tie as long as it is not meant to oppress or be ostentatious,” Brother Gift said.

Apostle Suleman is one of the most stylish Nigerian pastors that are both anointed and gifted with admirable sense of fashion. He smells of class and good taste and, with a fresh approach to dress and doctrine, his smart form, at every service hour, does command his congregation.

The new hair style is the talk in town. His admirers have continued to make his new hair style that matches perfectly his naturally fashionable look the latest topic. That pastors are heavenly conscious, doesn’t mean they can’t be earthly relevant, Apostle Suleman’s followers argue, adding that, combining fabrics and having a sense of fashion is a gift that some men are naturally endowed with, regardless of their circular or spiritual inclination.

For Suleman, he is a man with class and style. He is a fashion conscious man to the core. His choice of what to put on at a particular time and having them sit perfectly is astonishing. He serves his church members this consistent fashion sense and they say the style has been a major one for the man popularly referred as ‘The Restoration Apostle’  over the years.

Stepping out to give sermons in his usual smart look, Suleman doesn’t just look different than the stereotypically buttoned-up men of God, he is also reaching younger audiences in a way that the old-fashioned preachers simply aren’t. With a natural and genuine interest in modern style and culture, along with a more contemporary perspective, men of God like Apostle Suleman are changing how the current youth generation relates to Christianity.

Equally, apart from keeping the home front, Suleman’s wife, Lizzy Suleman, who has  been described as ‘edifying and encouraging individuals to live a purposeful life and achieve their dreams’ also cannot be shoved aside when it comes to style. She also is an epitome of beauty and class. Effortlessly glamorous, insiders say Lizzy only uses light make-up, which brightens her already beautiful look.

Fresh from his successful ‘Mighty Turnaround Crusade’ in Douala, Cameroun, Apostle Suleman agrees that it is important for the followers to be able to relate to their pastor on many levels; whether it’s style, culture, including religion.

“Having this relatable, approachable appearance is a way to immediately tear down a lot of walls between men of God and the people they are trying to reach. The message I am passing with my style is that I want to be fine to be who I am and to uniquely walk out to be who God has called me to be,” Suleman declares.