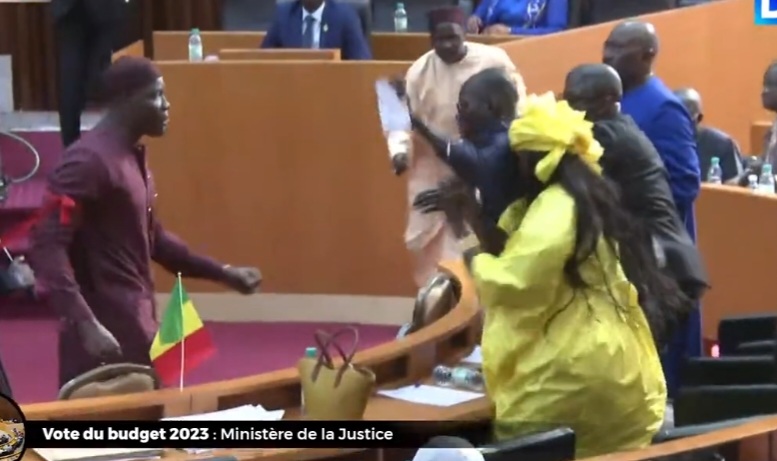 A violent brawl broke out in Senegal’s parliament on Thursday, December 1 after a male opposition lawmaker slapped a female colleague in the face, amid growing acrimony between the ruling and opposition party politicians.

Since a July legislative election, tension grew between ruling and opposition politicians in which the ruling party lost its comfortable majority, over concerns President Macky Sall will seek a third term in 2024.

Opposition member of parliament Massata Samb on Thursday was addressing the assembly about comments Amy Ndiaye Gniby of the ruling Benno Bokk Yakaar (BBY) coalition, made over the weekend in which she criticised a spiritual leader opposed to a third Sall term.

As the budget presentation was going on, opposition member of parliament Massata Samb walked over and slapped Amy Ndiaye Gniby of the ruling Benno Bokk Yakaar (BBY) coalition, setting off a flurry of brawls.

In retaliation,Gniby threw a chair at Samb before another Lawmaker tackled her to the floor. The session was suspended as lawmakers traded blows, accusations, and insults.

#Senegal 🇸🇳Heated debate in Parliament turns into a MMA fight with MPs deliberately assaulting a FEMALE colleague. TF's wrong with those guys??? pic.twitter.com/ywuQZ6eelu