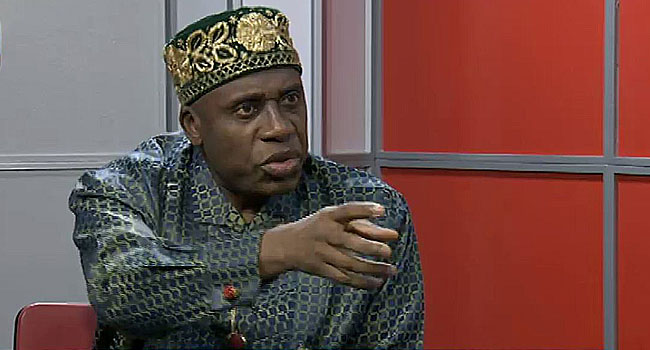 A Northern Group has abandoned Tinubu and approved Amaechi to succeed Buhari in 2023.

A coaliation group of Youth in Katsina state named Movement of Ameachi For President 2023 (MARPS) Katsina State Chapter, has approved Minister of Transportation and the former governor of River State Rt Hon Rotimi Ameachi to succeed president Buhari after the end of his second term in 2023

This is contained in their statement in Katsina on Monday 28 December, 2020.

Below is their statement in full…

It is time to start thinking of who will likely succeed president Buhari by 2023. We all know that North has its turn with the incumbent president who is from the region.

Now its time for the South. Among all the politicians from the South that are said to have shown interest in the race of becoming number one citizen of the country, Ameachi is the most resourceful, capable and youngest. He is vibrant, modern and digital.

He has belief in one nigeria. He joined politics in the university, he rose to the position of president of National Union of Rivers State Student.

He was elected the chairman of Nigeria’s Conference of Speakers of State Assembly to serve for four years.

These positions he held make him very resourceful, as a Governor he achieved a lot in infrustructural development.

He constructed roads & bridges that connected all parts of state by road. He began building of rail line in Port Harcourt that will provide means of mass transportation in the city. To improve power supply he built 3 power plants in Rivers state, namely Afam, Trans Amadi and Onne power plants.

His believe in justice and fair play made him to part ways with president Jonathan when he insisted that he would contest for president of Nigeria in 2015. Something that Ameachi believes was unjust and against the rotation agenda between North and South.

For that he defected from PDP and joins APC when he supported Northern candidate.

The role he played in ensuring Buhari win the 2015 and 2019 presidential elections can never be over emphasized.

He was appointed as the minister of Transportation in 2015, a position that made him to be named: “father of modern rail system” in Nigeria.

He initiated and succeeded in implementing the policy of China – Nigeria bilateral agreement for constructing rail line network in Nigeria.

To domesticate the technology he requests China to build, fund and equip the University of Transportation Technology in Nigeria; which the construction is on – going in Daura, Katsina state.

He is now constructing Ibadan – Kano rail line. He has secured the approval of building Maiduguri – Port Harcourt modern rail line at the cost of over 3 billion dollars.

He also secured the approval of Kano – Maradi rail line which will cost about 1.9 billion dollars. Katsina state. His role in the successes recorded by the present administration can never be over emphasized.

He completed and put to work the Baro and Anambra mini ports. He rehabilitated Onne, Tincan, Warri and Delta ports.

He has the highest number of completed and commissioned projects among the ministers of president Buhari.

Recently president Buhari commended the effort of Ameachi as the Minister of Transportation when he commissioned Abeokuta – Warri rail line, He says “ Ameachi deserves a higher responsibility”.

To our own understanding the higher responsibility here is President.

I will like to use this medium to appeal to Hon. Minister of Transportation to put into consideration, the rail line from Zaria to Funtua to Gusau and Kauran Namoda, if possible extend it to Sokoto & Kebbi states.

The recent pronouncement of suspension on Ameachi by some sponsored elements that shamelessly called themselves party leaders in Rivers state is nothing but a poisonous thought that no sane person would consume, and it was born out of growing antipathy towards the support he is gaining from every nook and cranny in the country.

We therefore urged Nigerians to shun that smear campaign against the person of Ameachi and focus on his loudable achievements as speaker, governor and the Minister of Transportation, they should redirect their search light toward his potentials, political outlook, ideology and perception about unity of Nigeria.

We all know that some politicians from the South that are eying the seat of President had at one point in time called for the division of Nigeria or compromised its unity.

Ameachi is the only person with no history of such blunder, that was as a result of his belief in one united Nigeria.

This proves that if he is elected as the president he will undoubtedly gives all region and religion equal opportunity and treatment. We urged Nigerians to be cautious in selecting who will succeed president Buhari by 2023 that we would not regret.

Finally, having seen his profile and achievements after thorough consultation from all 19 Northern state our forum under the leadership of Alhaji Abubakar Badamasi is hereby calling on His Excellency Chibuke Rotimi Ameachi to come out publically and announce that he will contest for the President of Nigeria in 2023.

We are also calling on his immediate family, relatives, political associates, friends, colleagues to please plead with him to answer our call and come to the rescue of our dear nation.

We want the general public to note that we will not relent and we will do everything possible, we can go extra miles to make sure that he answer our call.