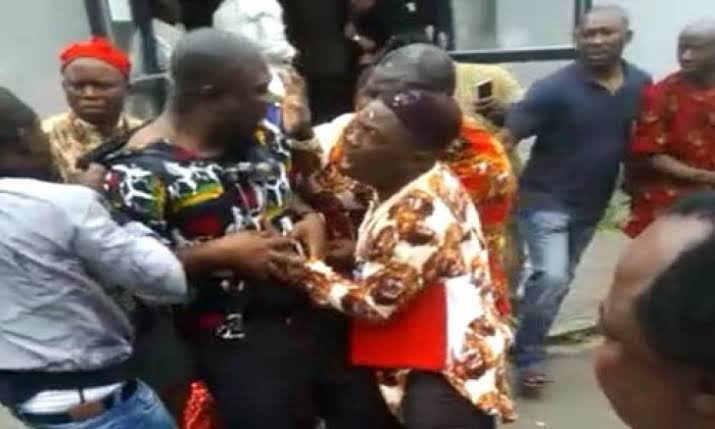 How Senator Ekweremadu Was Disgraced Again.

The report that the former deputy senate president, Dr Ike Ekweremadu was chased away by Nsukka youths at a football event in Ovoko is an indication that his people are no longer happy with him.

The Enugu West Senator was on Sunday, whisked away in Ulunya, Ovoko, Igbo-Eze South Local Government Area of Enugu State, when Nsukka youths invaded a football pitch where he was billed to kick-off a match.

READ: Declaration of Assets: Court strikes out charges against Ekweremadu

Ekweremadu has been in power since 1999. He rose from LGA administrator to Chief of Staff and later became Secretary to the State government.

He went to senate and was elevated to the office of the Deputy Senate President in 2003. For the past 18 years, Ike Ekweremadu has been in the senate.

Apart from seizing the senate slot of ndi Enugu west since 2003, Ike has dominated Enugu state politics, deciding who gets what and how.

He also seized the PDP structure in Enugu state and became the godfather of Enugu state politics. DSP Ike Ekweremadu has gotten to the peak of his political career.

OnyxNews Nigeria gathered that the people of Enugu West wants the Senator to retire and give way for new leaders to emerge. He must not continue to constitute himself as the only politician in the state.

He should emulate the former Senate President, Chief Ken Nnamani who stepped aside and allowed others to step into. The people, adding that those advising him to run for the 2023 governorship election are deceiving him.

This online news also gathered that Ike is from Aninri in Enugu West Senatorial zone where Sullivan Chime just finished his eight year tenure. His attempt to disrupt the zoning arrangement in the state will end his political career.

Senator Ekweremadu will be retired politically and that will be shameful. Ike has risen to the status of a great elder statesman. He ought to be grooming young men to take over from him.

But he wants to remain in power forever and give out peanut to the youths to keep shouting ‘Ikeohaaa, Ikeoha Ndigbo, ojebe goooooo.’

He should leave when the ovation is high. Igbos in diaspora sent that message to him when he visited Germany. Ndi Nsukka youths have also renewed the same message, it is up to him to listen, take wise advice and do the necessary thing.