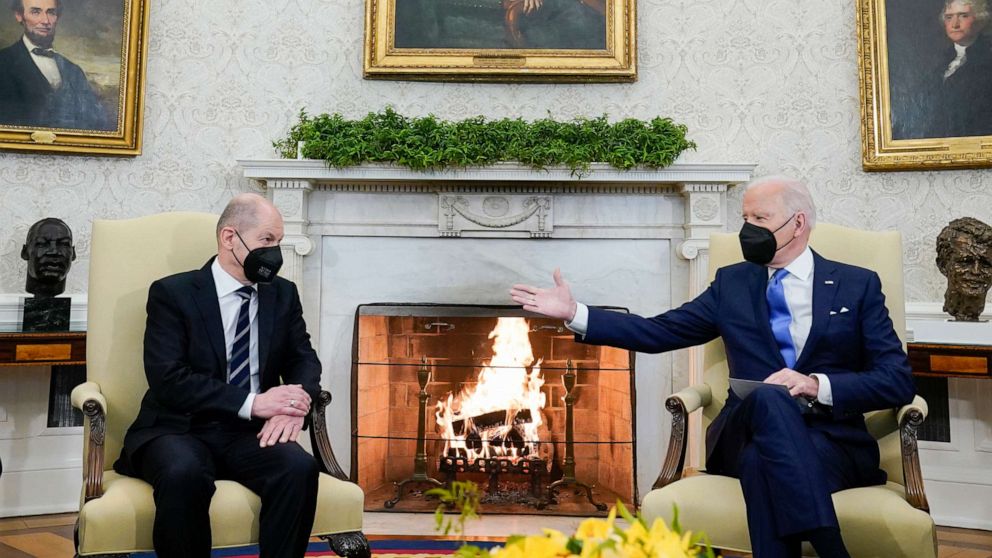 Onyxnewsng gathered that US President Joe Biden and German Chancellor Olaf Scholz on Monday said the “high price” Russia would pay for launching a new invasion of Ukraine would include an end to the Nord Stream 2 gas pipeline.

The two leaders addressed reporters from the East Room of the White House after a bilateral meeting, Mr Scholz’s first since succeeding Angela Merkel as Germany’s head of government.

Nether mentioned the pipeline in their respective opening remarks, but when Mr Biden was pressed on whether the controversial project would move forward if Russian troops cross Ukraine’s eastern border he addressed it directly.

“If Russia invades — that means tanks or troops crossing the the border of Ukraine again — then there will be no longer a Nord Stream 2,” he said. “We will bring it to an end.”

Mr Scholz did not use the pipeline’s name when asked about it immediately following Mr Biden’s answer, instead telling reporters through a translator that it was important to “not spell out everything in public” while adding that “far-reaching measures” had been “well-prepared” by both countries in advance.

But he expressed that the US and Germany would “act together jointly” to impose severe sanctions in the event of an invasion.

“There won’t be any measures in which we have a different approach,” he said. Switching to English for emphasis, he added that the US and Germany “will be united”.

Tinubu Returns To Nigeria After 10 Days In UK (Photos)

Pressed further, he said again that the US and Germany “are acting together”.

“We are absolutely united and we will not be taking different steps. We will do the same steps and they will be very, very hard to Russia,” he said.

The Russian-built pipeline project is meant to connect Russian natural gas supplies with Germany and the rest of Europe. It has become a point of contention between Berlin and Washington, along with much of the Nato alliance, because it is seen as a potential pressure point that would allow Russia to weaponise energy supplies to threaten Europe.
Winter Olympics LIVE: Speed skating and luge action after Team GB miss out on curling bronze

The pipeline has also been a flashpoint in US partisan politics in recent weeks, with Republicans and some Democrats pushing for the Biden administration to preemptively sanction companies participating in construction as a way of pressuring Moscow.

The meeting between Mr Biden and Mr Scholz took place just days after US officials warned that the 100,000-strong force Moscow has assembled on Ukraine’s eastern frontier is roughly 70 percent ready to launch an invasion, which could begin later this month when the ground reaches peak freeze conditions.

On Sunday, White House National Security Adviser Jake Sullivan said an invasion would “come at an enormous human cost to Ukraine” but preparations by Nato governments would also exact a “strategic cost” on Moscow as well.

“We are in the window. Any day now, Russia could take military action against Ukraine, or it could be a couple of weeks from now, or Russia could choose to take the diplomatic path instead,” he said.

The Russian buildup, which began last March, has continued despite calls for de-escalation from Mr Biden and other Nato leaders. Russian officials have said there are no plans to invade Ukraine but have warned of unspecified “defensive actions” if Nato does not give in to demands that Ukraine be barred from joining the alliance.

While the US, UK, and other Nato countries have deployed troops or supplied weapons to Ukraine in hopes of deterring Moscow from any further aggressive actions, Germany’s continued participation in the pipeline project has led some observers to call Berlin’s commitment to deterring Russia into question.

But Mr Biden rejected the suggestion that Germany was anything but a strong and reliable partner in the western alliance and said Mr Scholz “has the complete trust of the United States”.

“Germany is one of our most important allies in the world. There is no doubt about Germany’s partnership with the United States,” he said.