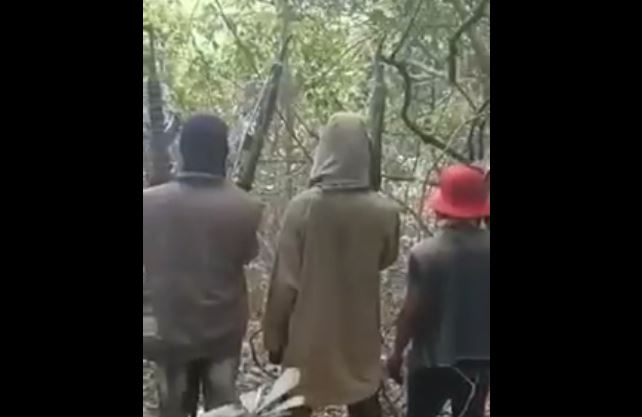 Some gunmen terrorising Nigeria’s South-east have released a video warning the Nigerian government not to hold the 2023 general elections in the region.

This is the first time these terrorists would release a video clip since they resumed hostilities in the South-east and some parts of the South-south Nigeria.

In a viral video, the gunmen said their grievance was the continued detention of Nnamdi Kanu, leader of the outlawed Indigenous People of Biafra (IPOB).

In the two-minutes, fifty-four seconds clip, four masked gunmen were seen in a forest wielding rifles while one of them talked.

The gunmen claimed they have no sponsor and that they are not under the command of anybody.
The video was released on Thursday, April 21.

“We the unknown gunmen in Biafraland have come to make our position known to the public. We are here to protect our fatherland by all means.

We don’t have any sponsor. And we are not planning to have one,” one of the gunmen said.

He continued, “We are not under the command of Simon Ekpa, DOS or Uwazuruike. Any government giving any of these people money is wasting their time.

“There shall be no election (in the South-east), and anybody that attempts any election matter will die.”

The gunmen also threatened to deal with any official of the Independent National Electoral Commission (INEC) seen holding elections in the South-east.

“No more political poster in Biafraland. If you try us, you campaigning, fire will burn you. Fake Biafran media, you think you can post any rubbish?

“We the unknown gunmen have endured enough from you. We shall no longer tolerate any rubbish from the media again.” the gunmen warned.

The gunmen alleged that some people betrayed them by collecting bribes from the Nigerian government.

“Emma Powerful, Chinasa Nworu, Justice Udo, who we also call (our) enemies, and three other persons in U.S.A, who we are still trying to get their full identities, have been bribed by the government of Nigeria,” he said.

They accused the named persons of sending “men to harm Senator Enyinnaya Abaribe” but that the men rejected their directive.

The gunmen said the people sent the names of the “men” to the media when the men rejected their directive to harm the Abia senator.

The gunmen did not mention the names of the “men” allegedly instructed to attack Mr Abaribe.
“From now henceforth, we declare you people wanted. Anywhere in the world, we shall haunt you people by all means,” the gunman said of the people.

The people who were accused of hatching the plan to attack the lawmaker are known IPOB members loyal to Nnamdi Kanu.