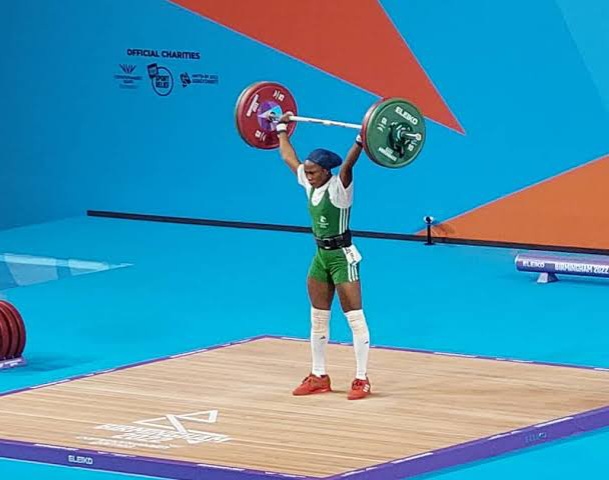 Nigeria has won her first gold on Saturday at the ongoing Commonwealth Games in Birmingham.

The first gold medal at the Commonwealth Games came through the record-setting Adijat Olarinoye, who emerged as the overall best in the women’s 55kg weightlifting.

She lifted 92kg in the snatch, 111kg in clean and jerk, lifting 203kg in total which is a Games Record.

Olarinoye’s win threw Team Nigeria’s camp into jubilation after the other Nigerian lifters failed to make the podium.

Many remain optimistic that more medals will be won after Saturday’s first gold.

One of such hopes is in the boxing event where Nigeria’s Abdul-Afeez Osoba also on Saturday knocked down his Bahamian opponent, Carl Hield (Red) to easily qualify for the Round of 16 in the men’s Light Middleweight division.

Meanwhile, in the Women’s Light Middleweight category (over 66kg -70kg), Bolanle Shogbamu lost her round of 16 match to England’s Jodie Wilkinson who won the bout 4-1 on points.