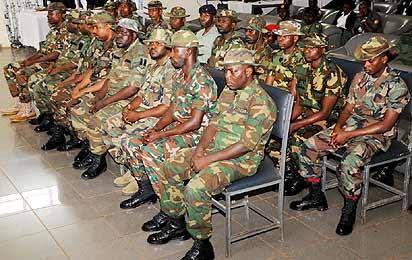 JUST IN: Over 200 Soldiers Court Martialed For Various Misconducts

Onyxnewsng gathered that 227 soldiers involved in the fight against insurgency in the North East of Nigeria have been brought before a General and Special Court Martial established by the military, for various offences.

The Theater Commander of Operation Hadin Kai, Major General Christopher Musa made this disclosure during the inauguration of a Special Court Martial to try 29 soldiers at the headquarters of the Theatre in Maimalari Barracks in Maiduguri, Borno State.

He said 4 Soldiers have been recommended for dismissal and 30 others are to be imprisoned.

The General and Special Court Martial also recommended 25 personnel for reduction of rank, 20 for loss of pay and 17 others to face severe reprimand.

Major General Musa further disclosed that 10 soldiers were discharged and acquitted, 14 cases were struck off while 107 were recommended for summary trial.

“What we have done is that they were recommended and forwarded to Army Headquarters. The confirming authority for the soldiers rest on the Chief of Army Staff, while the Army Council is the body to ratify the officers before the implementation,” the General explained.

He further noted that the whole essence is to ensure there is justice, adding that this is why it has taken the army some time to bring the matter to the fore, lest anyone feels they have been shortchanged in different ways.