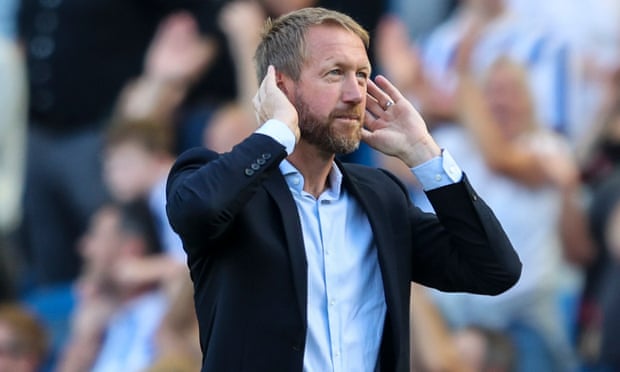 Graham Potter has been appointed as Chelsea’s new manager on Thursday after leaving Brighton to replace the sacked Thomas Tuchel at Stamford Bridge.

Potter has agreed a five-year contract to take charge of the Premier League club, who praised his “progressive football and innovative coaching”.

The 47-year-old earned widespread admiration for his work at Brighton.

He led Brighton to a ninth-place finish last season and took them up to fourth in the table this term, while demanding entertaining and tactically astute performances from his players.

Potter’s first game as Chelsea boss will be a derby at west London neighbours Fulham on Saturday.

“I am incredibly proud and excited to represent Chelsea FC, this fantastic football club,” said the Englishman.

“I am very excited to partner with Chelsea’s new ownership group and look forward to meeting and working with the exciting group of players and to develop a team and culture that our amazing fans can be proud of.

“I would also like to place my sincere thanks to Brighton and Hove Albion for allowing me this opportunity.”

Chelsea chairman Todd Boehly, who axed Tuchel just seven games into the new season, believes Potter will fit perfectly with his vision for the future at Stamford Bridge.

“We are thrilled to bring Graham to Chelsea. He is a proven coach and an innovator in the Premier League who fits our vision for the club,” Boehly said.

“Not only is he extremely talented on the pitch, he has skills and capabilities that extend beyond the pitch which will make Chelsea a more successful club.

“He has had a major impact at his previous clubs and we look forward to his positive impact at Chelsea.”

A Boehly-led consortium completed its takeover of the club earlier this year, bringing to an end Roman Abramovich’s reign.