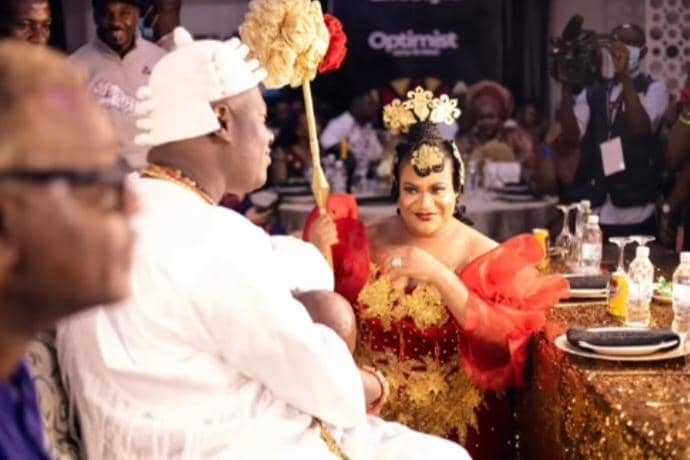 Controversial Nollywood actress, Nkechi Blessing Sunday has made her intention to be the next wife of the Ooni of Ife public.

She revealed this in a video she sahared of her kneeing in front of the Ooni of Ife with a caption; “Ooni of Ife sir, I’m patiently waiting for my turn sir… thank you in advance sir”.

The Ooni of Ife who has six wives in general and is rumored to want to take a seventh wife is yet to reply.

Although he revealed the reason he decided to take several wives weeks ago.

The Ooni explained that he tried making some changes but he couldn’t. Maybe referring to his decision to keep to only one queen and have concubines, the monarch said of the traditional heritage of Ile Ife.

Recall that an Ifa Priest has reportedly revealed the reason for the Ooni of Ife’s recent spree of marriages, claiming a deadline is involved just as the Ooni is set to take a 7th wife.

A YouTuber on Instagram disclosed a conversation between an Ifa priest and a friend where it was stated that the Ooni was simply following tradition and had a deadline to meet.

He’s alleged to have 13 wives before the allotted time is up.

The Ooni’s palace is yet to verify or deny the claim.